There are few things that inspire us more than a sunset on the top of a mountain, with a beautiful sea view. Jenny and Mark reached out to us with a wish to elope somewhere with sea views, ideally on the Hvar Island. As they both are nature and hiking lovers, we wanted to offer them something different from the elopement experience in Hvar city. Finally, they have chosen to elope way up, on the top of the island. Such a good decision! This was one absolutely beautiful and above anything else, very emotional elopement from start to finish.

That morning we woke up early to collect flowers beautifully made by Hedera design. As there are almost no flower shops on Hvar Island, we decided to pick up the flowers from the land and deliver it to Jenny and Mark on the elopement day. So the flowers traveled in our van, by ferry, and on the curvy island roads before we delivered it to Jenny. Jenny and Mark were staying at a nice modern apartment in Hvar city. Earlier that morning, Jenny had the make-up done by Veronika MakeUp. Mark and Jenny were getting together in the apartment before going for a walk and photo session in the beautiful old city core in Hvar. They stop for an ice cream break at one of our favorite spots in Hvar – aRoma Gelato before we headed back to the cars. The next stop was the elopement location, on the very top of the Hvar Island.

Jenny and Mark wanted a light hike for their day so St. Nicholas peak was the perfect spot. After a few minutes of hiking on the rocky area, they reached the top and at that point, they have chosen the exact place where they will exchange the vows. The ceremony was tear-filled (even for us) and the day was beautiful – almost no wind and beautiful deep blue shades mixing between the Adriatic sea and the sky. We enjoyed 360 degrees panoramic views – this is the perk of eloping at the island top. They celebrated with a bad-ass toast – homemade Croatian spirit (we call it ‘rakija’), followed by bio-degradable confetti that they had to throw multiple times since the wind started to blow.

Our beautiful experience ended just around the sunset time. We hugged each other and said goodbye. But only for a few days as their travel schedule included kayaking experience with us as adventure guides, scheduled in a couple days. To wrap up the day, Jenny and Mark booked a romantic dinner at a restaurant in Hvar city.

More from the blog 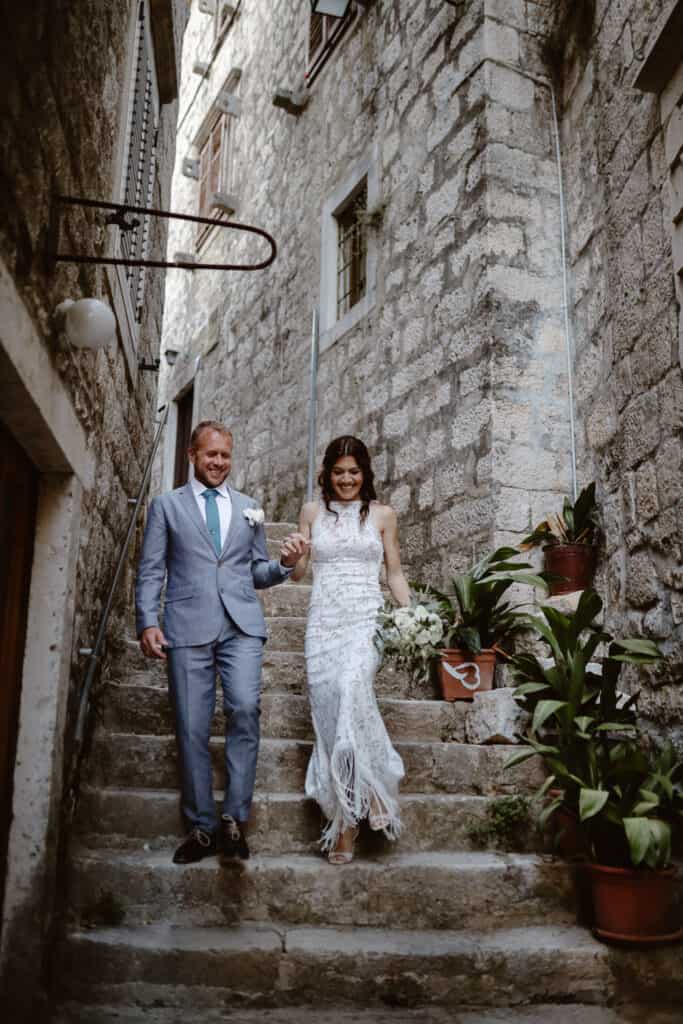 A guide to elope in Scotland

Scotland is one of the most famous elopement locations in Europe. It’s a country full of jaw-dropping wonders of nature such as giant rock pillars,

We are travelling goats

We are Mario & Andrea, a photo+video team, specialised in adventure elopements and intimate weddings. We are based in Croatia but also happy to travel to other beautiful places on the planet Earth. Contact us if you plan an elopement or intimate wedding with a pinch of adventure.

get in touch with us

Email us directly at hello@loveandventures.com